Message from the President

I am very conscious of the history of our Society. This, our 60th year, should be celebrated. We look forward to the upcoming visit of the Honourable Madam Justice Rosalie Abella at the dinner meeting to be held on March 31st, 2008. Madam Justice Abella was our keynote speaker for the 50th Anniversary celebration and is cognizant of our place in the community.

At my request, the Board of Directors approved a tender process for the construction of a new website appropriate for the Society. A contract has been awarded and the website is currently under construction and should be ready by the summer of 2008 with a view to an official launch at the 60th Anniversary dinner to be held on September 18th, 2008.

Ian Solloway and his committee are busy organizing this event. Our guest speaker will be the Honourable Mr. Justice Morris J. Fish of the Supreme Court of Canada.

In the next few weeks, both members and friends of the Lord Reading Law Society will be approached to contribute funds by way of sponsorship of this special event. The funds raised will help defray the cost of the evening as well as pay for the new website. Donors will be appropriately recognized on September 18th, 2008 and in perpetuity on the website page recording the event.

I trust that everyone will do their best to contribute to this effort which ultimately promotes the continuity of our Society. The next 60 will bring us to a life of 120 years!

REVIEW OF THE ANNUAL STUDENT DINNER

On January 29th, the Society was pleased to welcome the students and stagiaires to our annual Student Dinner. For this special evening, Me Gérald R. Tremblay, Q.C., McCarthy Tétrault and Paul Levine, C.A., of Navigant Consulting spoke on Expert Testimony in Chief and Cross-Examination – The Use of Visualization and Data Analysis.

The evening began with the presentation of the Society’s student awards, to Jennifer Klinck of McGill and Catherine Morneau of l’Université de Montréal. The Society was pleased to welcome the Deans of both law schools, along with many other luminaries. The speakers were introduced, with Me Tremblay being described as a “lawyer’s lawyer.”

Mr. Levine explained the expert should be examined with “less talk, more action.” After describing the accreditations for accountants, he suggested when possible to use an expert’s credentials against him. He recommended using visual evidence as much as possible, and closed by amusing the crowd with his “top 10 ways to shorten the career of a forensic accountant.”

Me Tremblay brought the house down with a string of amusing stories about judges, experts, and everything else under the Sun. His main point to take home about the topic was that you need your own expert to point out the flaws in your opponent’s expert’s report. Look for inconsistencies in methodology and calculations as much as possible.

Chris Shadbolt, Mr. Levine’s associate, then presented some examples of effective visuals in court in such circumstances. The key points was to make it clear, concise, and easy to understand. A simple animation can be effective in this regard. The panellists were thanked by Alan Stein. We thank the student and stagiaires for attending, and look forward to seeing them in the future.

As we build up to the September 18th celebration of the Society’s 60th Anniversary, we are pleased to present some snippets of history over the coming months. Today, Ian Solloway presents a retrospective of his year as President, 2001-2002: 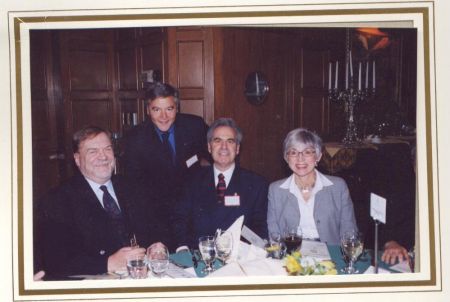 The Society will be co-sponsoring, with the Shaare Zion Congregation,a Symposium on the Ghet entitled “The Supreme Court and Canada’s Ghet Law: Good Decision or Bad Precedent?”  to be held at the Shaare Zion Synagogue on Wednesday, April 9th, 2008 at 7:30 pm. The panel will consist of Me Alan Stein, Me Anne-France Goldwater, Norma Joseph (founding member of the Canadian Coalition of Jewish Women for the Ghet), Professor Daniel Cere of McGill University (Religious Studies and Humanities), and Rabbi Joseph Prouser of Little Neck, NY (a recognized expert on the Ghet). Me Ian Solloway will be moderating the evening. The panel is free and open to all.

The Society wishes everyone a very Happy Pesach.

To the following for their sponsorship of the March 31 Dinner-Meeting:

To Beryl Baron on the passing of his mother.