This fall marks the 66th year since the Lord Reading Law Society was established.  I am privileged to be at the helm of the Society for the 2014-5 season, supported by a first-rate Executive and Board of Directors who volunteer their time and effort to ensure that the Society’s future is a bright one.

Our annual Alan B. Gold Advocacy Lecture will take place on Tuesday September 23rd, 2014. We are honoured to welcome The Honourable Mr. Justice Nicholas Kasirer of the Court of Appeal of Québec, who will address us on the topic of “That Montreal Sound: The Unique Character of Civil Law Parlance in Quebec”.  Our application for CLE accreditation has been approved for one hour of CLE credit. The dinner invitation can be downloaded here, or we encourage you to reserve and pay online. We would like to thank Davies for the generous sponsorship of the evening.

Our second lecture of the season will take place on Thursday, November 5th, 2014. We will welcome Gordon Kugler and Rabbi Sydney Shoham who will discuss bill C-52 , – An Act respecting end-of-life care.  An application for CLE accreditation will be submitted, and I encourage you to mark the date in your calendar and take part in this interesting evening.

The Society has a rich and storied history, is deeply ingrained in Montreal’s legal landscape and continues to evolve and play an important role in the Montreal legal community. Like any organization it is dependent on the participation of its members and supporters. I encourage you to become involved and attend our meetings to personally experience the warmth and collegiality of a Lord Reading Law Society dinner-meeting.  I look forward to seeing you at the opening dinner on September 23, 2014 and at other meetings throughout the 2014—2015 season.

Please note that judges, first year lawyers and notaries, and lawyers and notaries who have practiced for 50+ years are exempt from paying membership dues, but we ask that you sign up for your membership nonetheless. This is so that we have your coordinates, and also so that you will be in a position to benefit from reduced  members fees for each dinner.

If you are a law student, please contact the Society for special instructions.

Justice Morris Fish: An evening of tribute to the “Mensch on the Bench” 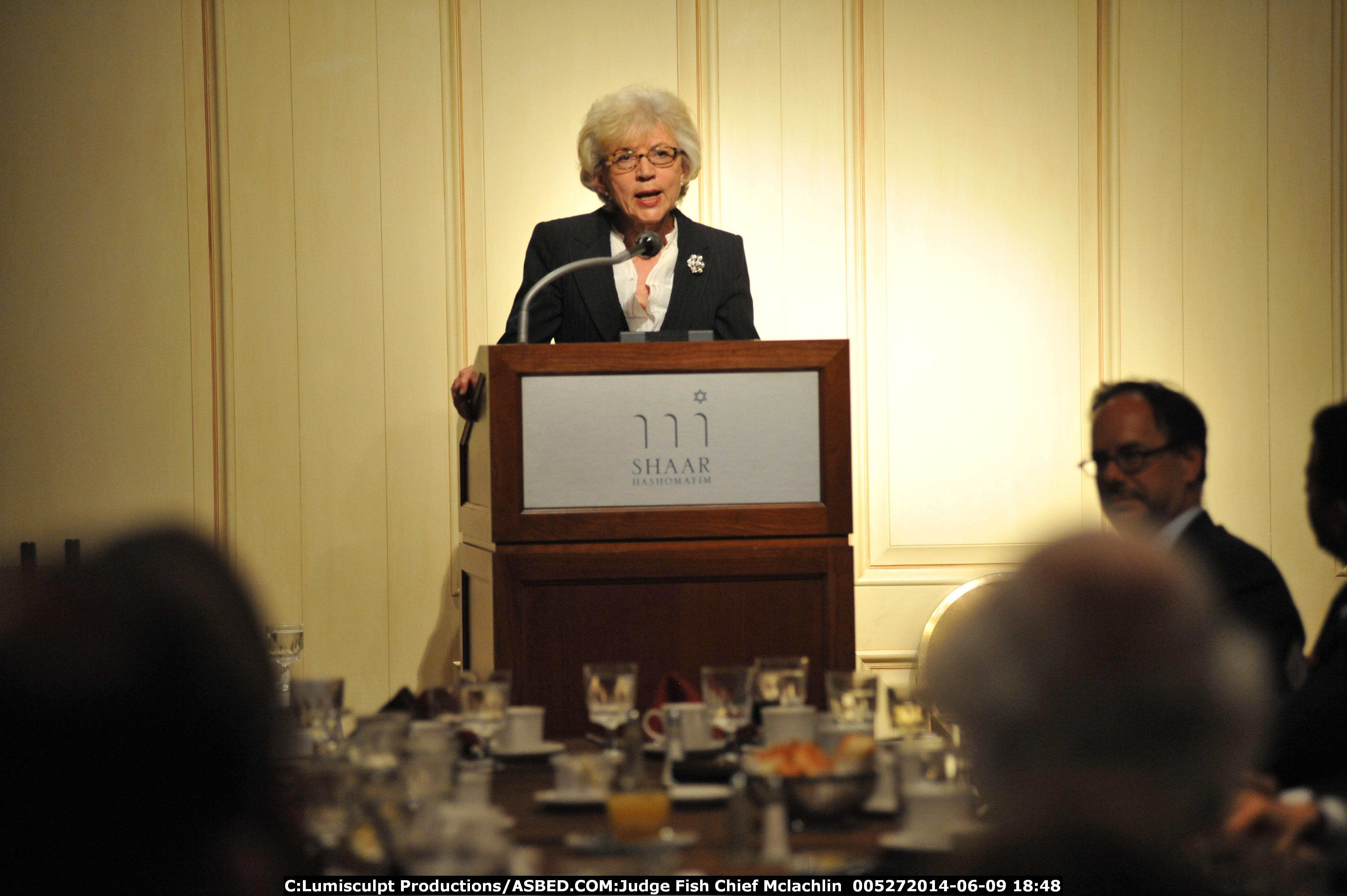 On June 9th, the Lord Reading Law Society held a star-studded evening of tribute to recently retired Supreme Court Justice, The Honourable Morris J. Fish.  In one of the most highly attended events in the history of the Society, the hall was graced by the presence of the chief justice of every level of the court system in Quebec, including our featured speaker, The Right Honourable Beverley McLachlin, P.C., Chief Justice of Canada.

Then, in an eloquent and deeply personal allocution entitled “Justice Morris Fish: 10 years at the Supreme Court of Canada”, the Chief Justice of Canada paid tribute to Mr. Justice Fish, highlighting his politesse and, summoning her best Yiddish, described him as “Our Mensch on the Bench”.

The Chief Justice described Mr. Justice Fish as having a “profound sense of justice”, which manifested itself in his insistence on protecting the rights of the accused and on ensuring transparency of the justice system, as well as in his rulings in favour of the constitutionally protected right to be secure against unreasonable search or seizure.  This last point has taken on even greater importance in recent years with the exponential growth of the online world. “For these three reasons, we owe him our gratitude”, said the Chief Justice.

Mr. Justice Fish was a master of the art of cross-examination, observed Madam Justice McLaughlin, not unlike Lord Rufus Daniel Isaacs, for whom the Lord Reading Law Society was named.

On a more personal level, the Chief Justice expounded upon Justice Fish’s character as “a colleague and a friend”. She described his zest for life and his courteous manner.

Justice Fish is also a talented archivist and legal historian, revealed Justice McLaughlin. She referred to his prodigious memory for every case in which he’s been involved and how he would mysteriously be able to instantly produce a copy of every factum and legal opinion he ever wrote.

Mr. Justice Fish mentored over 30 law clerks in his decade at the Supreme Court, getting to know each one, learning the clerks’ passions and then encouraging them to pursue that passion.

Outside of the legal scene, Justice Fish is an accomplished visual artist – talented in both photography and painting. A photo of the Chief Justice taken by Justice Fish is one her most prized possessions, she said, as it makes her look “serene”.

In the closing portion of her tribute, Chief Justice McLaughlin described Justice Fish as “Morris the Montrealer”. After 10 years in Ottawa, it was time to come full circle – back home to his roots here in Montreal. This concept is exemplified by the poem entitled “Caring” by famed McGill law professor F.R. Scott, which reads in part:

After the present falls the past,
After the festival, the fast.
Always the deepest is the last.

This is the circle we must trace,
Not spiralled outward, but a space.
Returning to its starting place

“He could have written it for you, Morris!” exclaimed the Chief Justice.

She then cited another poem by N. Scott Momaday entitled “To a Man Among Us”. It concludes:

You ascend the stair of justice
And take your place among those
Who have fashioned the bulwarks of civilization
We wish you well and Godspeed. Be of cheer
In your going.  Be the keeper of right and rule.

In closing, addressing her friend and former colleague, Madam Justice McLaughlin said to the evening’s honouree, “You are a ‘shofet zedek’, a ‘just judge’.” Then, alluding to the foregoing poem, she added, “You will always be ‘A Man Among Us’.”

The Chief Justice was thanked by Society board member and Superior Court Justice, The Honourable Carol Cohen, following which Justice Fish’s lifelong friend, and former law partner and colleague from the criminal defence bar, Harvey Yarosky, covered the part of Justice Fish’s life and career prior to his being named to the bench in 1989. In taking to the podium, Maître Yarosky half-jokingly referred to himself  as “an expert witness on Morris”.

Me Yarosky described Justice Fish’s childhood on Bagg Street on the Plateau Mont-Royal, his studies at Baron Byng High School, his education at McGill and his years as a criminal defence practitioner with the firm known mainly as Yarosky, Fish, Zigman, Isaacs & Daviault while Justice Fish was practicing.

Mr. Justice Fish was then presented with the Human Rights Award of the Lord Reading Law Society. Established in 1994, the Society’s Human Rights Award is presented to an individual who has demonstrated a sustained contribution to, or has been influential in the advancement of, human rights and fundamental freedoms. This is a significant award, since it represents the very core of the Society’s mission.  Past winners have included Irwin Cotler and Roméo Dallaire, among others.

Finally, the evening’s honouree took to the dais to thank the Chief Justice, reminding her that he’d once introduced her to members of the Israeli Supreme Court as “Hamalka shelanu” (our Queen). He also thanked the Lord Reading Law Society.

In honour of the evening and its honouree, the Society presented a $1,000 cheque to McGill’s Faculty of Law as a contribution toward the Justice Fish endowment fund in support of internships in human rights law.

In accepting the gift, Dean Daniel Jutras joked, “Morris gets the award, but I leave with the cheque!”

All in all, this evening was truly a momentous occasion, and indeed a memorable occasion, in the history of the Lord Reading Law Society. 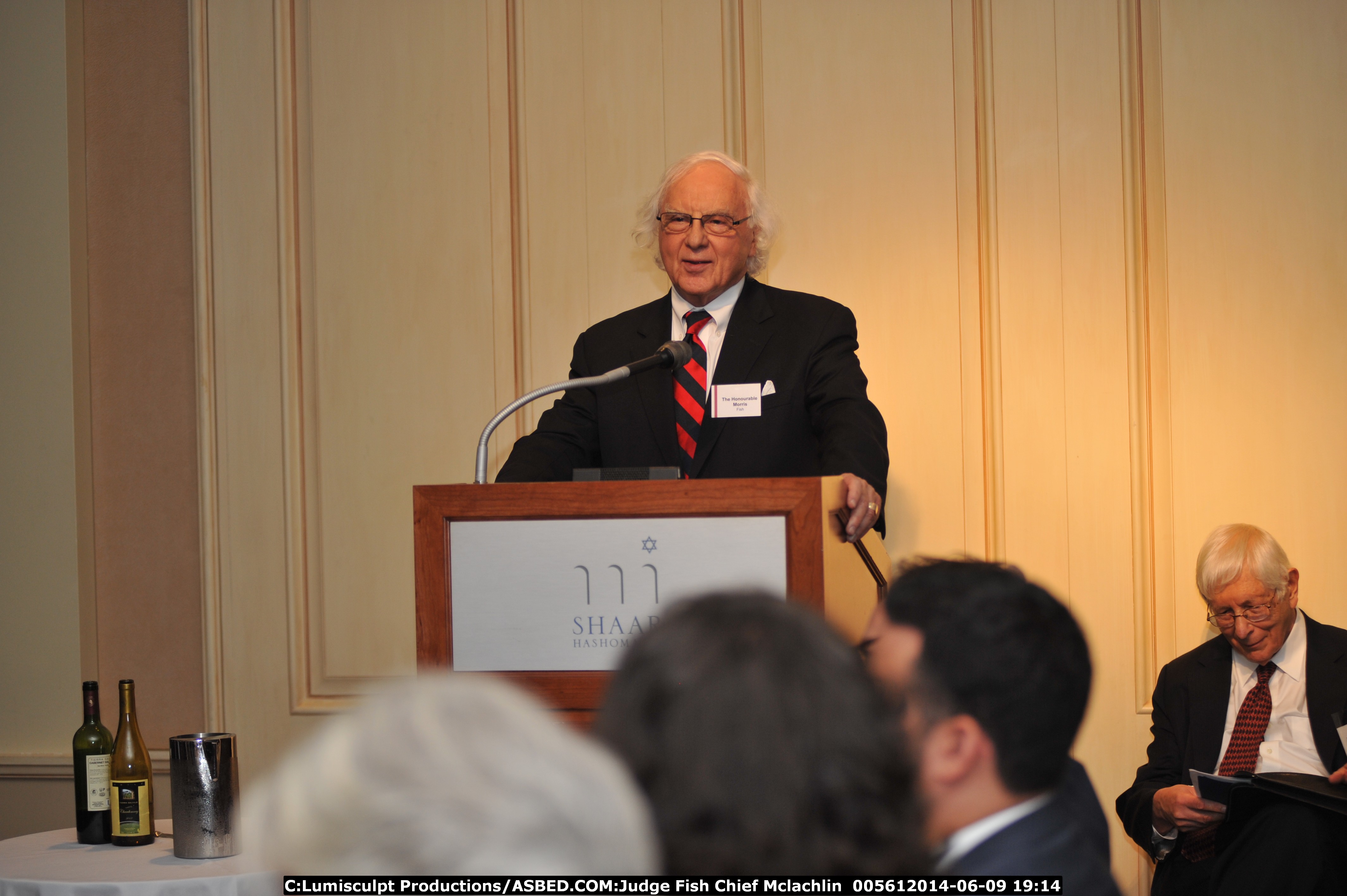 Call for candidates – consultative committees of the Barreau du Québec

We strongly encourage our members and friends to apply for the consultative committees of the Barreau du Québec before the deadline of October 31 2014. With the upcoming changes in governance at the Barreau, it is even more important that we try to get involved.

For more information, please see Le Journal Barreau du Québec pages 38 & 41 or the Barreau’s website. It sets out the lists of committees for which applications are sought.

“Controlling the Difficult Witness: Don’t Let Go of the Leash” CLE – save the date!

Please note that the 6th Annual CLE of the English-Speaking Section of the Bar of Montreal will take place on Thursday, November 6th, 2014  from 4:00 pm – 6:00pm. in Salle 5.15 (Salle Jules Deschênes) of the Montreal Courthouse.

This year’s conference is entitled “Controlling the Difficult Witness: Don’t Let Go of the Leash”. The conference will be moderated by Society Board member Robert Pancer. Additional details will follow in the coming weeks.

Please hold the date in your respective agendas!