Another rentrée judicaire, another new season for the Lord Reading Law Society. Now in our 68th season, First Vice President Larry Markowitz and I wish to extend a warm welcome to all. We have an action-packed list of events planned for you this year, several of which I would like to highlight.

We begin our season on October 15th with the Alan B. Gold Advocacy Lecture. We are honoured to have as our guest Mr. Justice Michael Stober, who will speak on “When silence may be golden”. The evening is graciously sponsored by Davies. The dinner invitation can be downloaded here, or we encourage you to reserve and pay online. Don’t forget that the early bird discount expires on October 10th.

On Tuesday, November 24th, we have the Henry Steinberg Memorial Lecture, which this year will be delivered by the Deputy President of the Supreme Court of Israel, Mr. Justice Elyakim Rubinstein.

From there, we break for the winter holidays and resume in January with the annual Student Dinner. On this night, we will be addressed by the former Bâtonnier of the Barreau de Montréal, Mr. Justice Richard Wagner of the Supreme Court of Canada.

March and April will feature a pair of dinners that we are currently in the process of confirming.

Following the spring break, Purim and, of course, Passover, we resume in May with our annual Young Bar Cocktail, to be organized by Marissa Lydynia & Andrew Kliger.

Finally, on May 25, 2016, we have a most special treat in store. The Annual Human Rights Dinner will feature a tribute to one of the most respected jurists in Canada, a cherished member of the mishpacha, The Honourable Irwin Cotler.  The organization of this evening is in the able hands of two of our Past Presidents, Casper Bloom and Ted Goloff, and their committee.

The Society has a rich and storied history, is deeply ingrained in Montreal’s legal landscape and continues to evolve and play an important role in the Montreal legal community. Like any organization, it is dependent on the participation of its members and supporters.  We encourage you to become involved and attend our meetings to personally experience the warmth and collegiality of a Lord Reading Law Society dinner-meeting.

Larry and I look forward to seeing everyone at the opening dinner on October 15th and at other meetings throughout the 2015-2016 season.

Shana Tova! Wishing you a happy and healthy New Year.

On June 16th, the Lord Reading Law Society held its annual Human Rights Dinner and who better to address the Society on this important occasion than the president of the Quebec Human Rights Commission, Jacques Frémont?

Prior to Maître Frémont’s captivating talk, the Society set the tone for the evening by awarding the prestigious Past Presidents’ Medal to former Society president and active board member Theodore Goloff in recognition of his work in the area of human rights generally and particularly his leadership role in connection with the brief filed last year by the Society in reaction to the Parti Québécois’ then-proposed Charte des valeurs québécoise.

Not only was Maître Fremont’s presentation the highlight of our annual Human Rights Dinner, but it also fell one day after the 800th anniversary of the promulgation of the Magna Carta and 40 years to the month following the passage of the Quebec Charter of Human Rights and Freedoms.

Much like the Quebec human rights charter, the Magna Carta did not have much impact at first, but eventually events conspired to demonstrate its importance. The Quebec Charter of Human Rights and Freedoms was adopted by the National Assembly in 1975 to little fanfare. It was really only once the Canadian Charter of Rights and Freedoms was passed as part of the constitutional repatriation process in 1982 that the Quebec Charter was “discovered”. As the courts proceeded to interpret provisions of the Canadian Charter, they would also cite the Quebec Charter.

The rights of Quebecers are better protected by the Quebec Charter of Human Rights and Freedoms than are the rights of residents of most other provinces, whose provincial human rights legislation is generally not as far-reaching as that of Quebec. Most provincial human rights legislation in Canada is restricted to protection against non-discrimination, whereas the Quebec Charter covers a wider ambit.

In his two years thus far as head of the Human Rights Commission – or as it is formally known, La Commission des droits de la personne et des droits de la jeunesse – Maître Fremont has found his biggest challenge to be the closed mindset of many Quebecers. However, if we want to discuss the inclusion of marginalized groups in society, we need to work with the majority, he stated.

To more effectively target his efforts to change the public’s mindset, Maître Fremont felt he needed a “sociological map” of Quebec. The worldview of those living in urban areas such as Montreal (the “514”, as he put it) is different than the worldview of suburban and rural dwellers (e.g., the “450”).

To draw this sociological map, Maître Fremont recently commissioned a detailed opinion poll of Quebecers. Although the results will only be released in October 2015 (at the National Assembly), Maître Fremont was kind enough to provide the Lord Reading audience with a sneak-peak based on preliminary poll results. Data collected to date indicates that, while Quebecers are often open to minority or marginalized groups, some groups are more “tolerated” than others. More “popular” groups – so to speak – include the physically disabled and visible minorities. Less “popular” groups include religious minorities and welfare recipients.

Factors that appear to affect tolerance levels include age (older Quebecers were less open to diversity) and education level (the more educated were found to be less prejudiced). The most important factor, though – by a factor of four – was proximity: The more often an individual had personal contact with members of minorities, the more tolerant that respondent was found to be.

Survey results thus far indicate that work remains to be done to change the mindset of a large segment of Quebec’s population. This jibes with the Human Rights Commission’s opposition to the Parti Québécois’ 2014 proposal for a “Charter of Values”, which made reference to undefined “common values” (“valeurs communes”). Would Quebec’s so-called “common values” reflect the will of the majority? or would they include protection for minorities against discrimination? It was quite clear the PQ intended the answer to be the former and not the latter.

Maître Fremont has observed widespread concerns among Quebecers about immigrants. We must be careful not to give legitimacy to unfounded worries, he said. Instead the government needs to learn the origins of such worries. Instead of speaking of “common values”, the government should speak of “democratic values”. These include inclusiveness, dignity, justice, equality and respect for diversity of religious beliefs.

Related battles being waged by the Human Rights Commission include fighting racism on social media and ending bullying in schools. Quebec society has come a long way in combatting racism, but there is still plenty left to do. That is why Maître Fremont’s role remains so important. 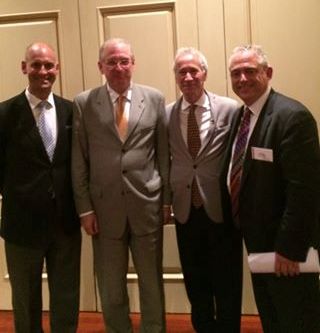 English CLE on the new CCP from the Bar of Montreal

The series of eight (8) courses being offered by the English-Speaking Section of the Bar of Montreal on the New Code of Civil Procedure began on September 29th with our lecture on “Pre-litigation Measures” given by Me Richard McConomy.  Our courses, which  feature some of the most prominent members of the Montreal Trial Bar, will continue at the St. James Club, 1145 Union , Montreal, on Tuesdays, from 8:30 – 10:30  am. (doors opening at 8:00 am for coffee and light early morning snacks).

A full schedule of the courses and instructions on how to register can be found on the Barreau de Montréal website.

Please note that if you are not available to attend any particular lecture in person, or if you wish to watch the previous lectures, each lecture will be made available by webinar on the date of the lecture or later in the fall. Therefore, I urge you to register for all eight (8) courses which will be accredited by the Quebec Bar for CLE purposes (2 hours per course; 16 hours for all 8 courses).

I would also ask you to circle the date of November 5th, 2015 on your calendar. On that date, the Section will be holding its 7th annual “Trial Practice Do’s and Don’ts: Hot Tips From The Experts” CLE Conference from 4:30 -6:30 pm in salle 5.15 (Salle Jules Dechênes) of the Montreal Courthouse. Our “Do’s and Don’ts” CLE Conference has proven to be one of the most popular and widely-attended conferences of the year. Further details will follow shortly.

The Bar of Montreal, the Office of the Commissioner of Official Languages, the Language Rights Support Program and the Quebec Community Groups Network are pleased to invite you to the conference “The Language of Statutes and Judgments” on October 21, 2015, from 12:30 to 6:00 PM at the St. James Club. The conference has been certified for 4 hours of CLE.

The conference features a distinguished group of speakers on two distinct panels – “English Version of Quebec Laws” and “Lack of Visibility of Quebec Jurisprudence in the Rest of Canada”. Lunch will be served, and during lunch there will be an address by Mr. Graham Fraser, Commissioner of Official Languages.

Full details and registration instructions can be found on the Barreau de Montréal website.

Make Your Mark in the 2015 Election

Lawyers are always in high demand by political campaigns on Election Day. Volunteer on a political campaign and help our community have an impact beyond its numbers. CJPAC (the Canadian Jewish Political Affairs Committee) connects you with the party and campaign (or riding) of your choice. Contact us at volunteer@cjpac.ca, 514-938-0514 or visit www.cjpac.ca/volunteer.

The Society is pleased to announce that it has pledged its support to a new book entitled “Honorary Protestants: The Jewish School Question in Montreal, 1867-1997“. Written by author and law professor David Fraser in conjunction with the Osgoode Society for Canadian Legal History, the book will be released October 30.

The Society is delighted to invite you to the book’s official launch on November 10th, 2015 at 6:00 p.m., at Paragraphe Bookstore at 2200 McGill College.

Éducaloi, an independant non-profit organization with a mission to inform Quebecers about their legal rights and responsibilities, is in need of English and bilingual lawyers to give workshops on a number of topics. If you would like to volunteer, please contact Diane Skiejk at 514 954-3408, ext.3658 or diane@educaloi.qc.ca.