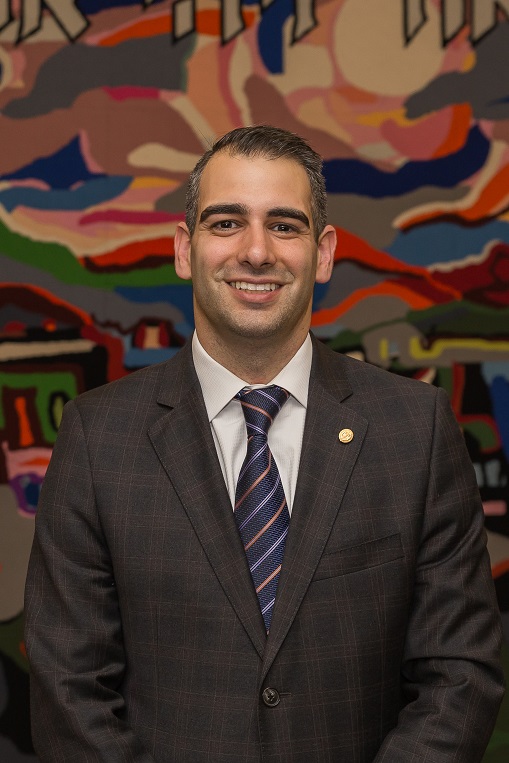 The first half of 2018 is shaping up to be one of the busiest times in the Society’s history, with events literally every month. After a very successful Students Dinner in January, February brought our second members-only CLE breakfast of the season, a standing room-only event enjoyed by all who attended. You can read more about those events further below in this newsletter.

April will bring the first-ever Young Bar members CLE lunch, and in May our season is sure to finish strongly with the Annual Human Rights Dinner, at which we are delighted to welcome The Honourable Salim Joubran, the first Arab to receive a permanent appointment to the Israeli Supreme Court.

Our next event is sure to be a memorable one. On the occasion of the annual Justice Henry Steinberg Memorial Lecture on March 15th, we are pleased to welcome – as our keynote speaker – the 29th Premier of Quebec, the Honourable Jean Charest, PC.

In addition to being a successful lawyer and politician, Mr. Charest is a charismatic orator and his lecture promises to be captivating. I invite you to register using the links at the left of this page. An early registration discount is available for Society members who register by Thursday, March 8th. If you are a student and want to attend, please email info@lordreading.org to get a special discount!

I thank our dinner sponsors BCF, ZSA Legal Recruitment, Hatley Strategies and Phillips Friedman Kotler for their generous support of the evening.

I look forward to welcoming you on March 15th!

Loto-Québec: The view from the top 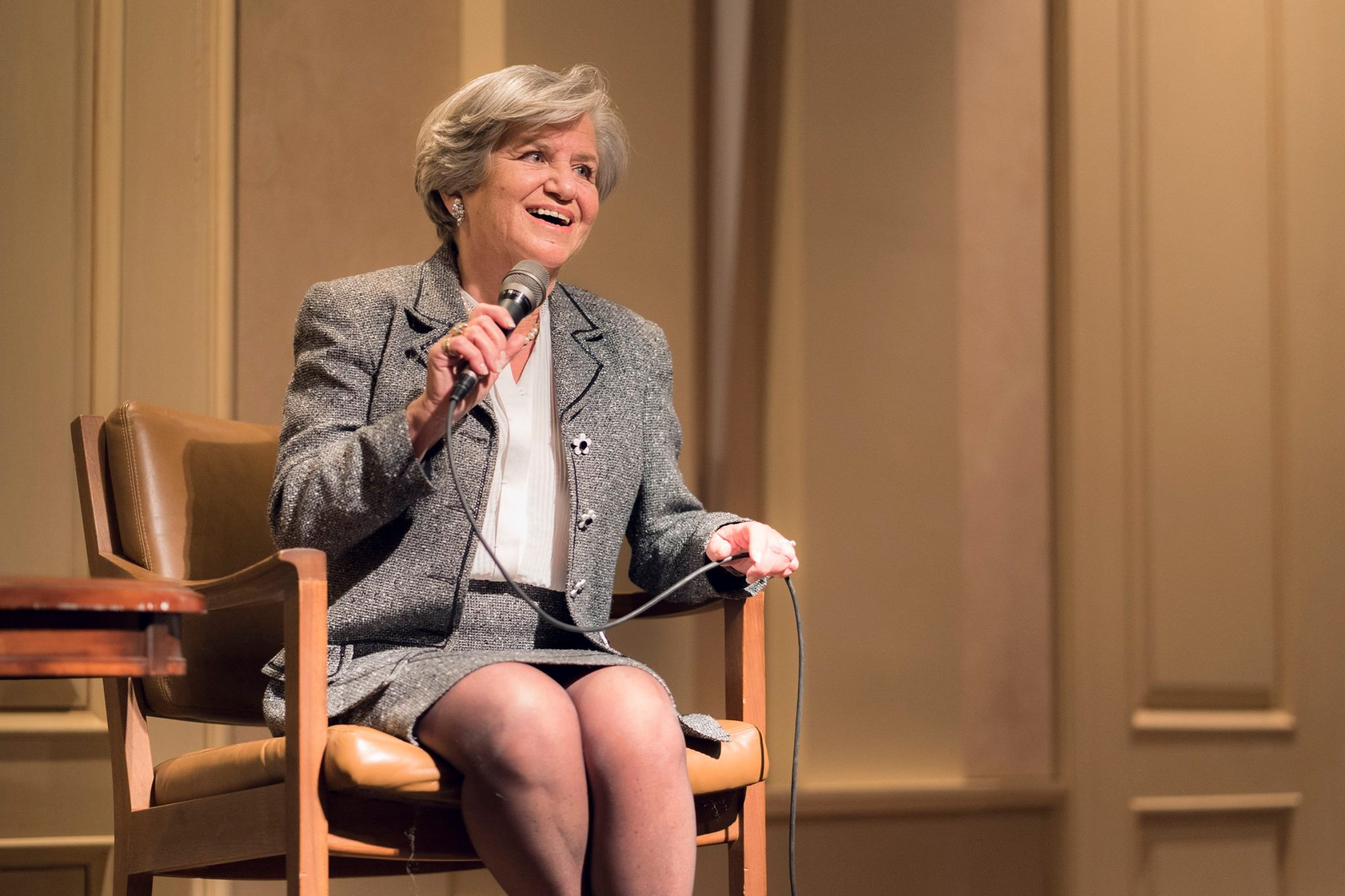 Loto-Québec CEO Lynne Roiter. All the great pictures from the event can be found on our Facebook page.

Attending this dinner didn’t change us, except …

On January 24, 2018, the Lord Reading podium was graced by three of the most successful women in Québec's legal community.

The evening began with the presentation of the second annual Prix du Ministre de la justice du Québec – Association de droit Lord Reading by Québec Justice Minister Stéphanie Vallée. The deserving winners were Allen Mendelsohn, who won the Access to Justice Award, and Evara David, winner of the scholarship for the law student who best promotes and advances the objects of the Society and the mission of the Ministère de la Justice.

Immediately afterwards, Osler’s managing partner (and Lord Reading member) Sandra Abitan interviewed Loto-Québec CEO Lyne Roiter on-stage. Throughout this "fireside chat" (without the fireplace), Mtre.  Roiter displayed humility ("Many of you have had more distinguished careers than I have") as she ‎recounted her journey to the top of our province’s lottery and gaming crown corporation – as the first woman, first Jew, first Anglophone and first lawyer to reach this prestigious post.

After beginning her legal career in her father's law firm, ‎Mtre. Roiter moved in-house to the Régie de l’assurance automobile du Québec. This was at the time when no-fault accident insurance was being introduced in our province, offering Mtre. Roiter the opportunity to play a key role in establishing the legal framework for automobile insurance at a seminal moment in Québec’s legal history.

One early experience of hers involved negotiating the first inter-provincial agreement on automobile insurance with Ontario. Mtre. Roiter also recounted the time she accompanied then-premier René Lévesque to speak to the governors of the northeastern United States on the topic of automobile insurance.

Soon after joining Loto-Québec in 1985, Mtre. Roiter moved from Québec City to Montreal, where she was struck by the divisions she observed between linguistic groups – divisions that did not exist in the smaller (and less diverse) provincial capital. Fortunately these divisions are less pronounced nowadays, remarked Mtre. Roiter‎.

Despite working at the same company for more than 30 years, her role has evolved, as has Loto-Québec, ensuring that she has consistently been exposed to new challenges and experiences.

In her early days at Loto Québec, one of her first career-enhancing challenges was when she was called upon to defend the right of Loto-Québec to conduct sports betting using results of National Hockey League games.

Mtre. Roiter credited various mentors who had a positive influence on her career, such as one of her predecessors as CEO of Loto-Québec. On the topic of mentorship, she advised us that, if you are well prepared‎ and know your facts solidly, you will rise to the next level and will attract champions from within your organization.

She also discussed the important role played by in-house lawyers. For one thing, they are typically more involved in the genesis of company strategy. They cannot just throw up legal roadblocks. Instead, they have to find alternate ways to achieve the desired result within the applicable legal framework.

In her interview questions, Mtre. Abitan asked how a woman CEO's leadership style differs from that of a man. Mtre. Roiter advanced the idea that as a woman, she is more apt to listen and to seek to understand different points of view. But then, as would any manager, she needs to be pragmatic and take a decision – often in collaboration with the "great team” working under her, but still, as leader, the decision is hers to make at the end of the day. Now that she is CEO, "the buck stops" with her! Mtre. Roiter has enjoyed – and continues to enjoy – much success at the helm of this iconic Quebecois institution.

The two successful women on-stage, to whose conversation we were privileged to listen, served as truly inspiring role models for the many law students and young lawyers who were in the audience for this, our annual Students' Dinner.

Thank you to the Society! 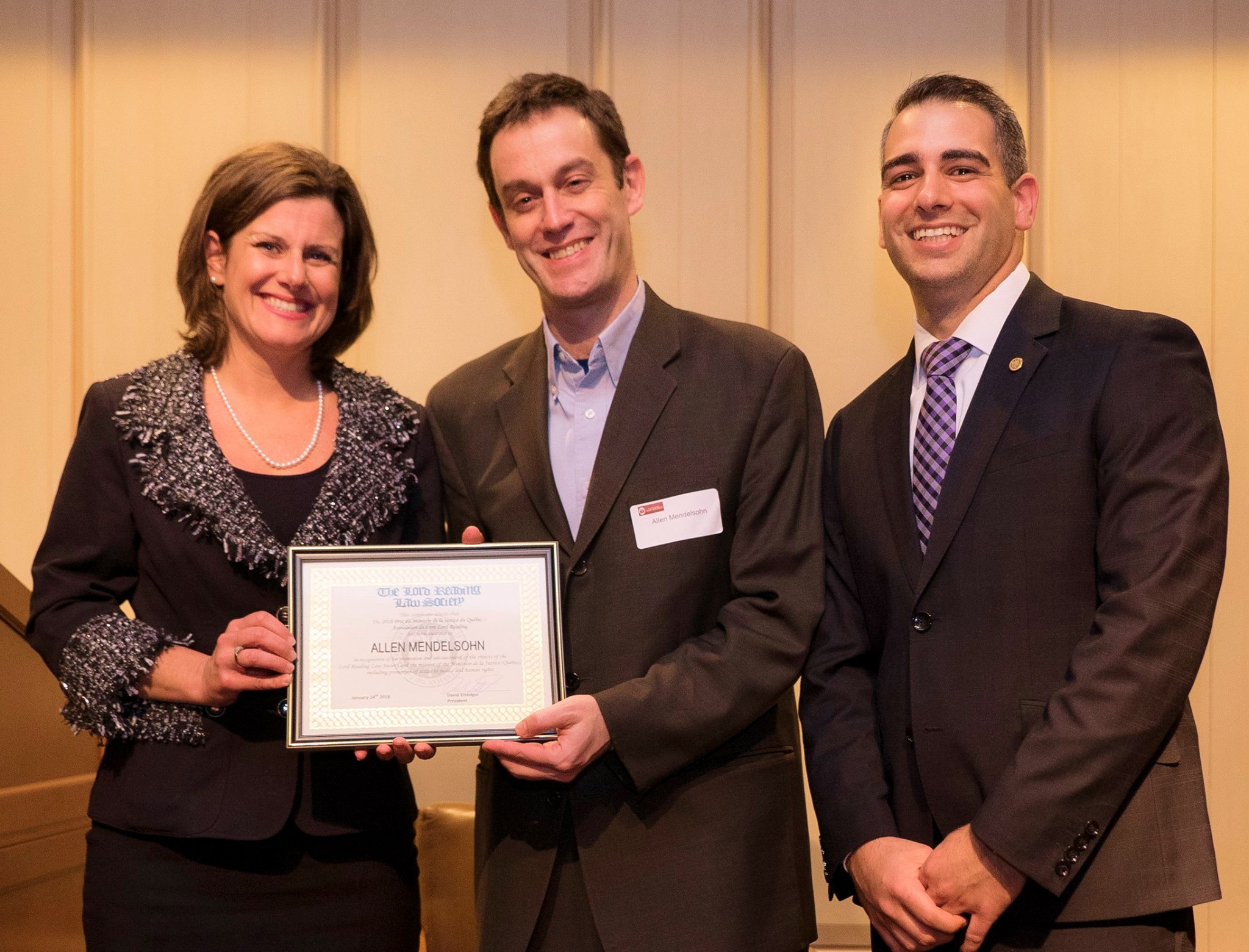 As you may have just read in Larry’s story above, on January 24th, I was honoured to receive the Prix du Ministre de la justice – Lord Reading Access to Justice Award. I am hijacking this newsletter (the editor tried to stop me but was unsuccessful) in order to thank Stéphanie Vallée, the jury who selected me, and whoever it was who nominated me in the first place.

The award was truly a surprise; this is clearly evident by the state of my hair in the picture above. All credit to the jury and anyone else involved – as Communications Director, I know everything going on in the Society. That they (and anyone else who knew) were able to keep that secret is a credit to them.

I am truly proud and humbled that I was chosen as the winner. I don’t do volunteer work for the recognition, but receiving that recognition is extraordinarily gratifying. I am especially proud that the award shines a light on the wonderful and tireless work done by the Mile End Legal Clinic; I only play a small role in helping that organization truly make a difference in access to justice in this city. I am also truly pleased and humbled to follow in the footsteps of the inaugural winner last year, Anne Soden, who does incredible and truly meaningful work.

I sincerely thank all of you for bestowing this honour on me. It’s an honour I am still not sure I deserve, but I will do my best to uphold the values the award represents.

Thank you to the Society, Part 2!

The Lord Reading Society has played a pivotal role in my life as a law student and I look forward to many more years of involvement. The sense of community and belonging as well as mentorship that I gained through meeting so many wonderful and intelligent people was invaluable. I am honoured to be part of this warm and welcoming community. 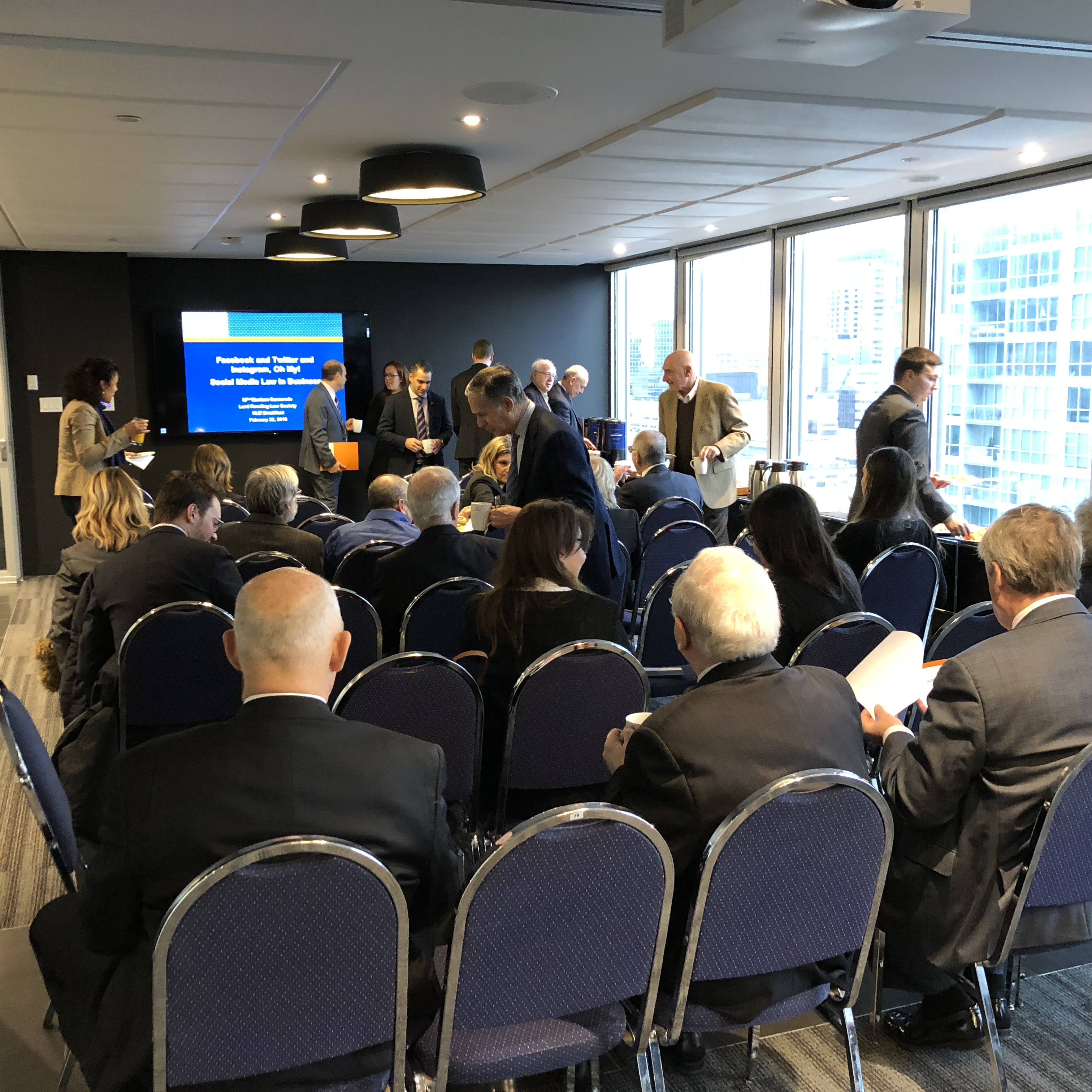 The crowd abuzz in atnicipation. And caffeine! The full set of photos can be found on our Facebook page

Lawyers can sometimes feel lost in the world of social media. But they can’t be, as their clients are using it every day, and there are a wide range of legal implications. Fortunately, the Society came to the rescue!

On February 22nd, the Society held its second members-only CLE breakfast of the season. We were fortunate to have Me Marissa Carnevale of Lapointe Rosenstein Marchand Melançon give us an in-depth examination of the legal issues surrounding social media. Me Carnevale was thoughtful, entertaining and informative in equal measures throughout her presentation.

A wonderful explanatory video of social media’s importance opened Me Carnevale’s presentation. She described social media as “the new radio”, and that is certainly true given its centrality in modern life. Social media works on trust and recommendations from friends, which certainly has an impact on businesses.

Me Carnevale ran through a number of legal issues related to social media. The contracts formed with users and the value of personal information were key elements from the social media companies’ perspective. Me Carnevale examined the legal implications of running contests on social media, and told some important horror stories of such contents, as well as hacked data and user-generated content. She also delved into advertising law and language law, and how they applied in the social media context. It was a tremendously thorough rundown of the subject matter – all in about an hour!

A very lively question period followed the presentation. The attendees were indeed curious about the subject matter and had all sorts of questions, and Me Carnevale was gracious in answering all of them.

The Society thanks Lapointe Rosenstein Marchand Melançon for their hospitality in hosting this very successful event. These CLE breakfasts, implemented only last year, are fast becoming highlights of the Society’s programming for their important legal information on hot legal topics… and bagels.

Events and announcements of interest

The Society is pleased to let you know about various events and other announcements which may be of interest to our members and friends.

News from the Mishpacha