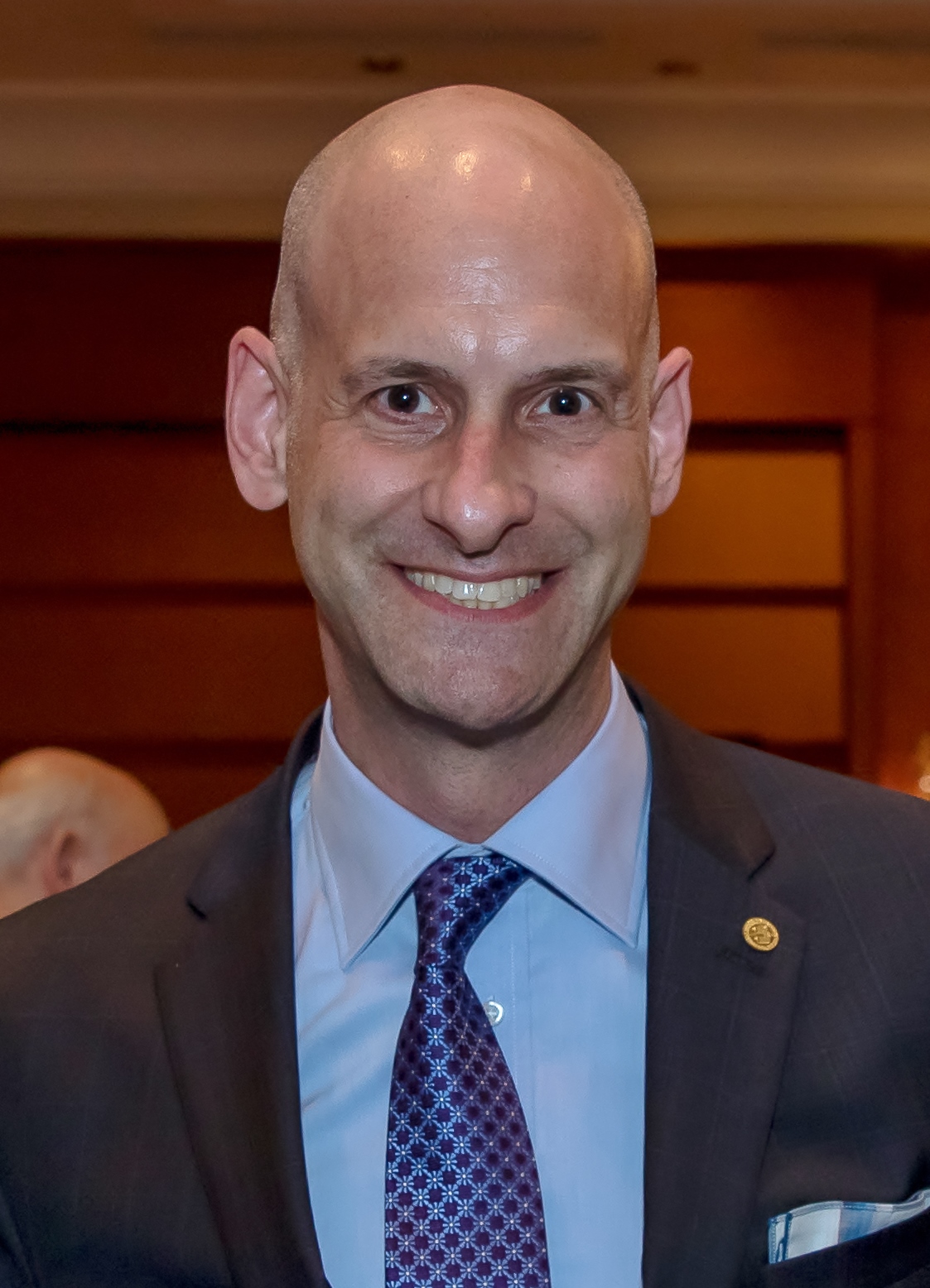 Shana tova! May the Jewish new year 5777 be filled with health, happiness and success for all of us.

It has been several months since I was sworn in as President of the Society. In that time, I have regularly been reminded of the high esteem in which our Society is held. I am often invited to represent the Society at prestigious events – be it the opening of the Courts, the award ceremony for the Prix 2016 de la Justice imaginative of the Université de Montréal’s Faculty of Law, or the CJPAC / CIJA reception with MPs on Parliament Hill.  In addition, I was recently granted the opportunity – and indeed the honour – to serve as a member of the prestigious jury for the 10e Gala JBM « Les leaders de demain » of the Jeune Barreau de Montréal, alongside chief justices, bâtonniers and law faculty deans.

‎The high regard accorded to the Society by the legal community – and by the community at large – is a testament to the past presidents, Board members and other Society volunteers who blazed the path for the current executive and Board over the nearly 70 years since our Society’s founding. I wish to personally thank all of you for your efforts that led us to this point.

Innovation seminar & our next dinner

For the second year in a row, we will be co-presenting a legal seminar in conjunction with the Consulate General of Israel in Montreal – this time culminating in our next dinner-event on the evening of Thursday, November 3rd, which will feature an engaging presentation by the man who oversees the State of Israel’s world-class ecosystem of innovation, Asa Kling, Director of the Israel Patent Office and Commissioner of Patents, Trademarks & Designs.

Israel is the “Start-up Nation”, one of the world’s foremost technological innovators, boasting more publicly listed technology companies than any country outside the United States. Just this week, the World Economic Forum ranked Israel the second most innovative country in the world.

Behind any hub of innovation is a legal system that protects intellectual property and allows it to be exploited efficiently and profitably. Mr. Kling is a dynamic speaker. I strongly urge you to come hear him describe the Intellectual Property Law framework and other entrepreneurial initiatives driving Israel’s economic success story.

This event will appeal to those of you with an interest in innovation, start-ups and entrepreneurship, as well as those who wish to learn more generally about what’s happening in Israel and its world-class economy.

Please register for the event at the link on the left of this page. For early bird rates, please register by tomorrow, Friday, October 28th. We thank BLG for their generous sponsorship of the evening.

Our dinner will be the culmination of an international seminar on the theme of ‘Innovation’ being organized by the Centre for Intellectual Property Policy at McGill’s Faculty of Law (with Lord Reading as co-presenter).  If you’d like to attend the November 2nd portion (and potentially gain an additional 4 hours of CLE credit), please click here for further information and to register directly with McGill.

Other co-presenters of the November 2nd seminar include the Consulate General of Israel in Montreal, the Centre de recherche en droit public of the Université de Montréal and the Harvard Club of Quebec.

We look forward to welcoming members and associates of these organizations at our November 3rd dinner at the Shaar, and to providing them a taste of the Lord Reading spirit of camaraderie.

See you all on ‎November 3rd! (and hopefully on November 2nd, as well!)

Because of the standing of the Society, our input is often sought. There is no better example than when the provincial government ‎recently announced it would be holding hearings at the National Assembly on Bill 62 – An Act to foster adherence to State religious neutrality and, in particular, to provide a framework for religious accommodation requests in certain bodies. Lord Reading was one of only two Jewish community organizations invited to testify before the parliamentary committee studying the Bill.

Lord Reading’s view was sought not because we were going to rubber stamp the proposed law, but rather because the powers-that-be in Quebec City knew they would be getting serious and constructive feedback from an association of skilled jurists, who are attuned to the intricacies of human rights law.

Indeed, we are opposed to Bill 62 – as we were to the late – and not-lamented – ‘Charter of Values’ in 2013. We consider the legislation proposed by Bill 62 to be superfluous; existing laws and jurisprudence already deal adequately with matters of reasonable accommodation and the wearing of religious garb.

As this newsletter goes to press, the Society is being represented in Quebec City by the Chairman of our Human Rights Committee Frank Schlesinger, by Past President Ted Goloff and by Board member Michael Bergman.I wish to personally thank this trio of esteemed jurists for the many hours of effort they put into preparing our brief – particularly in light of the relatively short notice we received from the National Assembly. I also wish to thank Board member Andrew Kliger, who devoted many hours of his valuable time to help prepare our submission.

For those interested, our Bill 62 submission will soon be posted on this website. We will update this note when the submission becomes available.

UPDATED October 28th. Frank Schlesinger, Ted Goloff and Michael Bergman have appeared. Here is a photo of them at the National Assembly. You can watch their appearance here. Furthermore, the Society’s memorandum is now available to read. 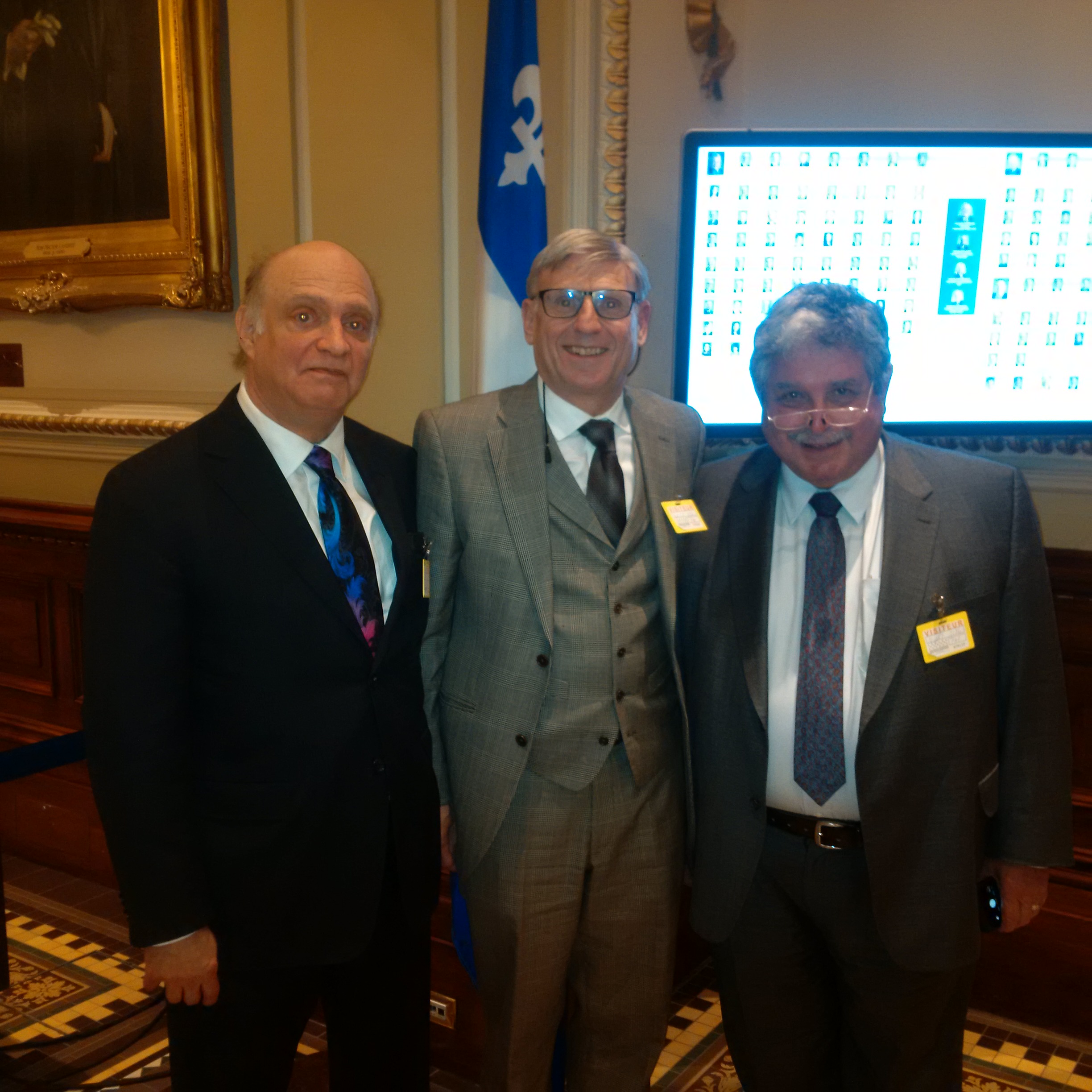 A Wonderful Evening with SCC Justice Moldaver and Adam Dodek

On September 14, a huge crowd saw The Hon. Justice Michael J. Moldaver being interviewed by University of Ottawa Professor Adam Dodek on the Lord Reading stage, on the occasion of the Alan B. Gold Advocacy Lecture. The evening can only be described as a rollicking good time, with the two exchanging witty banter and Justice Moldaver delivering fabulous anecdotes throughout.

The evening would be impossible to summarize here, but we can try to present some of the best moments: 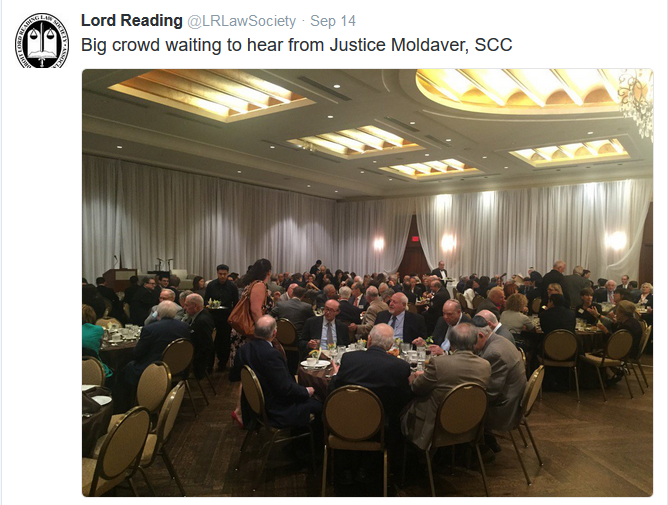 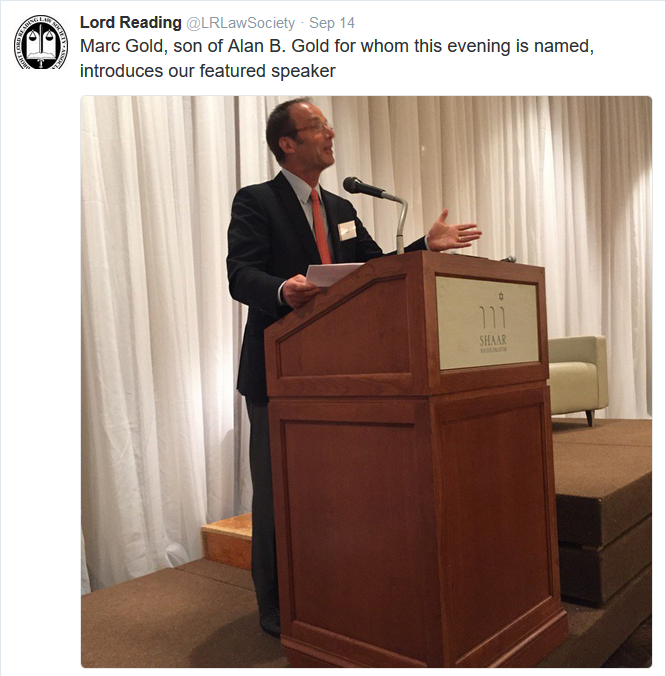 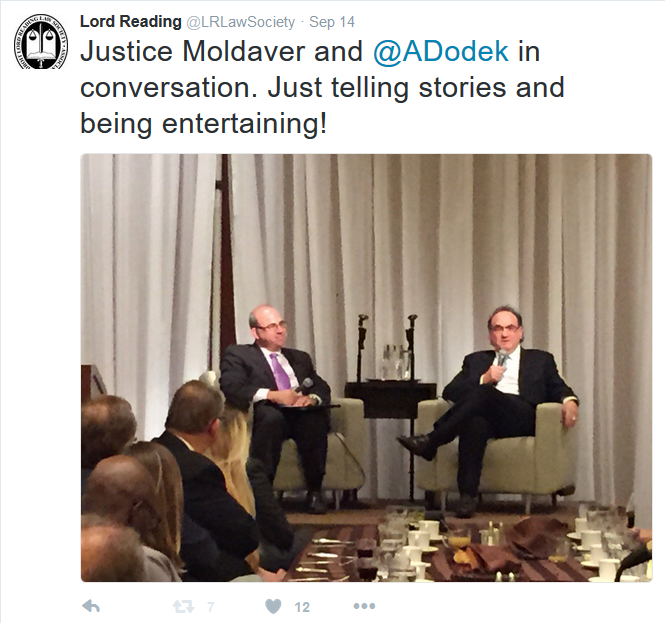 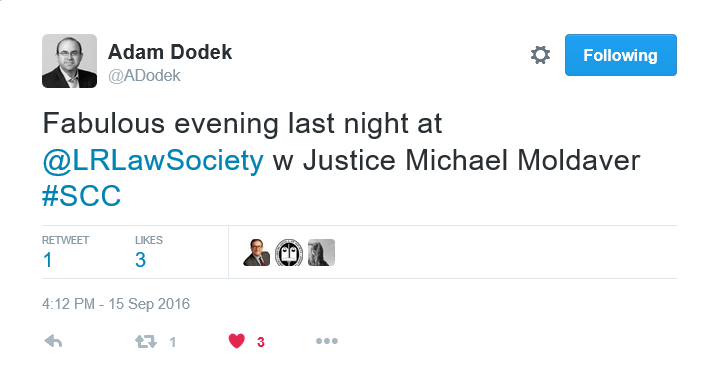 We are so excited for the second annual Lord Reading Young Bar hockey night! On Tuesday, November 15 we invite all Lord Reading members, especially young bar members, and law students to gather at the Lord William Pub to watch the Montreal Canadiens play the Panthers. We’ll have food and drinks and we expect a great time, especially with the Habs’ hot start!

Details can be found on the Young Bar page. Go Habs Go!

I am pleased to invite all Lord Reading members and friends to this 2-hour CLE event, on November 10th at 4:30 P.M. at Room 5.15 of the Montreal Courthouse.

The coming into force of the new Code of Civil Procedure on January 1st, 2016 ushered in a new era for all participants in the judicial system in Quebec. Trial lawyers, litigants, and judges alike have had to adapt to a new culture, new terminology, and new approaches to trial practice. With change come challenges and sometimes difficulties in our day to day practice.

In what promises to be a most informative and timely programme, the theme of this year’s 8th annual Trial Practice Do’s and Don’ts: Hot Tips from the Experts CLE of the English –Speaking Section of the Bar of Montreal is “The New Code of Civil Procedure: Complexities and Confusion, Ten Months In”.

The Conference will feature a distinguished panel of four jurists:  Me Peter Kalichman, who will deal with the “Case Protocol”; Me Lynne Kassie, Ad.E, who will speak about “Family Law procedural issues under the New Code”; Me Michael N. Bergman, who will deal with pre-trial and out-of-court examinations; and the Honourable David Collier, j.c.s., who will deal with Case Management and the trial judge’s perspective. As Chair of the English-Speaking Section of the Bar of Montreal, I am pleased to moderate the conference.

You can find out more and register at the Bar of Montreal website.

On November 17, Society Past President Casper M. Bloom will be honoured by ADDUM, the Association des diplômés en droit de l’Université de Montréal, on the occasion of their Grand Diner 2016. Casper is being honoured for his lifetime of service to the legal community of Montreal and beyond, on the 50th anniversary of his graduation from the Faculty.

Details and registration information can be found on the ADDUM website. 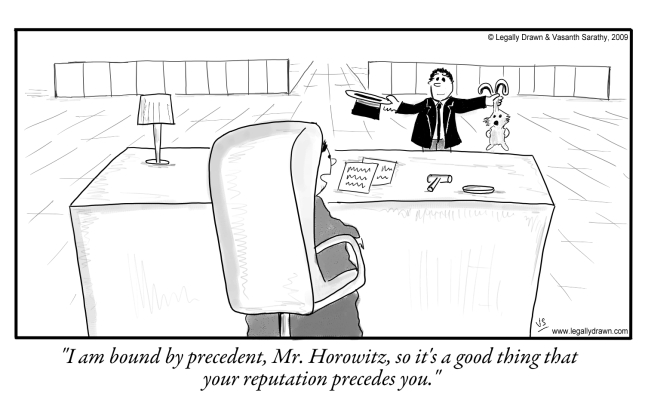