I am delighted to report that we had a record turnout on the occasion of the annual Alan B. Gold Advocacy Lecture. Mr. Justice Allan R. Hilton of the Quebec Court of Appeal provided us with a truly in-depth lecture on the issue of: “Language Rights of Accused in Canada”. The feedback about our new venue was overwhelmingly positive and we are looking forward to another fantastic evening in the same location.

On October 27, 2011, on the occasion of the annual Henry Steinberg Memorial Lecture, the Associate Dean, Graduate Studies of McGill, Professor Rosalie Jukier will be addressing us. Her topic is: “‘Backstage at the Palace’: Analyzing Judicial Methodology in Mixed Legal Systems and Why Judges Do What They Do”.

Please note that we have introduced a new policy of providing a discount for early registrations. We encourage you all to reserve your place by October 21st to take advantage of the discount, which you can do online. Many thanks to our generous sponsor Robinson Sheppard Shapiro.

We are also happy to announce that our first three events have all been accredited by the Chambre des Notaires as well as the Barreau. As you know, CLE credits are only available for paid-up members. The dinner invitation and membership application are available through our website .

I thought some of you would be interested in a recent article that appeared in La Presse. The link is below.

Richard Marceau, General Counsel and Senior Government Advisor to the Centre for Israel and Jewish Affairs, was featured in La Presse earlier this week – which published an excerpt from his upcoming book. The French version of the book, which traces Richard’s journey as a pure laine Quebecer into the spiritual world of Judaism and …

A New Year is a time for renewed optimism and hope. I wish for all of you good health and continued success.

Language Rights of Accused in Canada – A Review of the Alan B. Gold Advocacy Lecture

On September 20th, 2011 on the occasion of the annual Alan B. Gold Advocacy Lecture, the Lord Reading Law Society had the honour of welcoming the Honourable Mr. Justice Allen R. Hilton of the Quebec Court of Appeal, who discussed language rights of the accused in Canada.

Following a smorgasbord of hors d’oeuvres and a tasty meal from our new caterer, the formal portion of the evening began with the Society’s highest honour, the Past Presidents’ Medal, being bestowed upon Maître Casper Bloom.

Mr. Justice Hilton prefaced his remarks by pointing out that his chosen topic of language rights was very apropos, given that the evening’s lecture was being held in honour of the late Mr. Justice Alan B. Gold, who drafted the 1995 Report of the Ad Hoc Committee on Access to Justice in the English Language in the District of Montreal, commonly known as the “Gold Report”, and in light of the fact that Maître Bloom, who has been very active throughout his career in the area of language rights, had just been awarded the Past Presidents’ Medal.

•The Criminal Code provides that an accused has the right to be present in court during the whole of his or her trial. Connected with this basic principle is the idea that the accused should have an understanding of what is occurring around them in their own language throughout the trial, particularly if their mother tongue is one of Canada’s official languages;

•Section 14 of the Canadian Charter of Rights and Freedoms provides that a party in a proceeding who does not understand or speak the language in which the proceedings are conducted has the right to the assistance of an interpreter;

The judge who presides over a criminal trial has a duty to ensure that the accused is advised of their right to apply for an order directing the trial to be presided over by a judge who speaks the appropriate official language.  Mr. Justice Hilton cited several examples where defense counsel was either not aware of this right or simply did not advise their client of its existence.

The laws in this area do not go far enough, however, in the view of Mr. Justice Hilton, as these provisions apply only to the accused and to witnesses, but do not apply to the judge or counsel. In order to be truly “present” at their trial, as the law stipulates, the accused must understand not only those portions of the trial where they are called upon to testify or where other witnesses testify, but must also be able to understand what the judge is saying and what their own counsel is saying on their behalf.

The basic objective of policymakers, in the view of Mr. Justice Hilton, should be to achieve equality of rights for the accused across Canada. Often, when official language skills are lacking in a jurisdiction, particularly outside of Quebec, the quality of simultaneous translation is lacking. One example recounted by Mr. Justice Hilton which made the audience laugh, but which was not funny when it actually occurred, was a poor translation of the testimony of a coroner who, in describing an autopsy, stated that the cause of death was “trois balles dans le crâne”, which was simultaneously translated as “three balls in the crane”, a translation so literal as to be incomprehensible!

Mr. Justice Hilton cited numerous cases that, over time, have moved us toward greater language rights for accused across Canada. However, there still remains some distance to be covered.  In his conclusion, he recommended that defense counsel’s awareness of the language rights of an accused be enhanced throughout the country. He also recommended that those cases which merit an order changing the venue of the trial to one where the appropriate official language is spoken be more effectively identified by chief justices when assigning judges to hearings.  Finally, he strongly recommended that only judges who have the ability to conduct a trial entirely in the language of the accused be assigned to that trial.

Mr. Justice Hilton left us with the hope that the cases he had cited, in which the language rights of the accused had not been respected, would be the last such cases contributing to the body of jurisprudence in this area. Let’s hope his wish comes to pass.

I am pleased to announce that the 3rd annual “Trial Practice Do’s and Don’ts: Hot Tips from the Experts” CLE Conference of the English–Speaking Section of the Montreal Bar will take place on Wednesday, November 9th, 2011 from 4:00 – 6:00 pm in Room 5.15 of the Montreal Court House (Salle Jules- Deschenes). In the 3 years since its inception, the Section’s “Do’s and Don`ts” Conference has come to be recognized for its excellence and is widely regarded as one of the best, if not the best, CLE programme offered annually.

The general theme of our “Do’s and Don’ts” Conference this year will be “Alternative Dispute Resolution” (ADR) and will feature 4 distinguished jurists: Honourable Pierre A. Michaud, O.C., c.r., Ad.E., who will deal with the appointment of arbitrator(s) and selecting the appropriate procedure; Me Sylvie Schirm, who will speak about timing and how to prepare your client for mediation; Me Pamela McGovern (former head of commercial litigation at Lavery, De Billy, now head of legal services at Hydro-Quebec), who will present the client’s perspective; and the Honourable André Roy, j.c.s., who will deal with risk assessment, options v. positions, and settlement conferences. Me Greg Moore, a member of the English Speaking Section, and a Montreal Bar councilor, will be moderating our conference this year.

Since we are on the horizon of receiving a new Code of Civil Procedure, which apparently will oblige parties to consider ADR to settle their dispute before entering into litigation, trial lawyers will necessarily have to sharpen their skills in this area in order to provide effective service to their clients. Our programme and the advice of our expert panel could therefore not be more timely!

A cocktail sponsored by the Bar of Montreal will follow the programme.

Cost: $50.00
Registration is now open on the Barreau de Montréal website. Please register early and encourage your partners and associates to do likewise, as we expect another overflow attendance.

I look forward to seeing you all on November 9th. 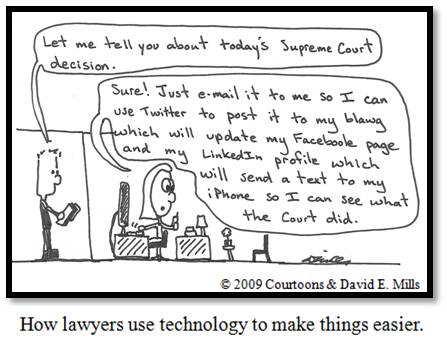