Our 70th Anniversary season will come to a close on June 11, 2019 with another hot ticket legal event, a talk by the Justice Minister of Canada, David Lametti; but before we conclude, I would like to take stock of everything that we, the Society, have accomplished this season.

Before the official start of our season, the Society managed to accomplish two great feats. For the first one, we produced a video tribute to the Lord Reading Law Society, a film which showcased our history, passion for law, justice and the people who have made the Society what it is today, our past presidents. This film was a labour of love and it really captured the Society’s spirit. If you have not yet seen the full film produced by the Society for this occasion, I encourage you to view it on our website. Thank you to Neil Hazan and Ashley Kandestin for this beautifully executed project.

The second feat was inaugurating a newly redesigned and improved website, which helped to keep us current and relevant in today’s world and keep you informed of our achievements and events during the year. My personal and Society’s thanks go out to our Communications Director, Allen Mendelsohn, for his hard work on this  project (and many others!).

Looking Back on the Season

Our official season started off on October 24, 2018, with a Gala celebration of the Society’s 70th anniversary. Our special guest of the night was The Right Honourable Justice McLachlin, former Chief Justice of the Supreme Court, who talked to us about “Living with Diversity”, a most timely topic and one that is close to the heart of our Society. In recognition of Justice McLachlin’s friendship and support of the Society, we presented her with an honourary membership during the Gala dinner.

Not even a month later, on November 20th, we held our season’s first, members-only breakfast, at the offices of Lapointe Rosenstein Marchand and Melançon, on the very current topic of the “New Cannabis Legislation – What You Need to Know”. Me Alexa Rahal and Me Stephanie Marcotte gave a thoughtful and informative presentation on the newest legislation which has far-reaching effects on so many areas of law.

Without taking much pause, we flew straight to our next event (no pun intended!) on December 6th, with an interesting and informative talk from the engaging Me Arielle Meloul-Wechsler, Air Canada’s Senior Vice President, People and Culture, responsible for overall leadership for human resources, labour relations, communications, and culture change initiatives across the company. As a member of Air Canada’s executive team since September 2013, Me Meloul-Wechsler gave us an insider’s only look into the inner workings of one of Canada’s most iconic companies.

The new year opened with our Annual Student Dinner on January 31st. Our esteemed guest was The Honourable Suzanne Côté, Justice of the Supreme Court of Canada, who showed her willingness to share her wealth of knowledge and experience with the young lawyers in our audience, by giving a talk entitled “Building your practice as a young litigator”. During the same dinner, we honoured the memory of the late Justice Michael Stober, awarded prizes to exceptional law students from five of the province’s law faculties and celebrated two of our members, an attorney and a student, Donald R. Michelin and Stephanie Perlis, as the Justice Minister Sonia Lebel awarded them Le prix du Ministre de la Justice – Lord Reading, for their tireless work on behalf of the Society and beyond, promoting access to justice and human rights.

Our Annual Henry Steinberg dinner was held on March 13th and we were honoured to welcome the 18th Prime Minister of Canada, The Right Honourable Brian Mulroney as the Society’s guest speaker. The dinner and speech were a resounding success, and the audience was once again reminded of the personal charisma and power of presence of one of Canada’s greatest leaders. Mr. Mulroney’s address to the Society on the issue of Anti-Semitism was picked up by both national and local press, once again raising our Society’s profile and highlighting its importance to the public.

Our second members-only CLE breakfast of the season was held on March 19th at the offices of Borden Ladner Gervais, on the topic of “Legal Strategies to Protect Your Clients from Ever-Sophisticated Fraudsters”, and was presented by Me Daniel Grodinsky and Me Kevin Mailloux, who gave the sold-out room practical advice on how to help our clients and keep one step ahead of the fraudsters.

We continued a tradition that began last season with our second annual members-only Young Bar CLE event on April 17th, but updated it with a brand new, 5 à 7 format. The event was held at the offices of Stein & Stein and featured our very own Allen Mendelsohn, McGill law lecturer and internet law expert, with an always timely presentation on the topic of “The Legal and Privacy Implications of Online Cannabis Purchases in Canada”.  Wonderfully successful for the second year in a row, this event is sure to become a staple in the Society’s calendar.

On May 2nd, we held our annual Alan B. Gold advocacy lecture and because this year is a special anniversary year for the Society, the talk was extra special as well, as we welcomed the late Justice Gold’s son, Senator Marc Gold as our guest speaker.  Senator Gold let us all in on a few secrets of the behind the scenes workings of the Senate, this venerable Canadian institution, and master class skills that are required to try and achieve one’s goals as an independent Senator. For further details, please see Larry’s report below.

Experienced lawyers and Society’s executives mingled with law students, stagiaires and young lawyers at the Young Bar Cocktails on May 29th, organized by our Young Bar Committee Chairs, Matthew Pekofsky and Ashley Kandestin, at Escondite Cerveceria de Barrio, where the fiesta atmosphere helped everyone to network and enjoy themselves.

Our final event of the 70th Anniversary season will take place on June 11, with a talk by the Justice Minister and Attorney-General of Canada, David Lametti, on the subject of, what else, justice and the government.

I would like to thank our evening sponsor, Dentons, for their support of the Society. Thank you also to the firm of McCarthy Tétrault for their table sponsorship.

An early registration discount will be available for Society members who register by Thursday, June 4th. You can register online on the website.

Despite the Society’s already full social schedule, our members did not forget their primary objective of standing up for human rights, and the Society’s Human Rights Committee, chaired by Frank Schlesinger and co-chaired by Robert Steinman, produced and submitted to the National Assembly a memorandum outlining the Society’s opposition to the proposed Bill 21, the Bill that would restrict the ability of certain individuals to wear religious symbols while working for the government.  I would like to express my sincere appreciation to Frank Schlesinger, Theodore Goloff, Robert Steinman, Tibor Hollander and Stephane Lacoste for their tireless efforts in producing and drafting this and related documents, which are now available for your viewing on our website. I would also like to suggest you read a great interview with Frank Schlesinger on the subject in The Canadian Jewish News.

Despite having been denied a viva voce hearing, a portion of the Society’s Memorandum did make it into the hearings on the Bill 21 when it was cited by David Birnbaum, MNA for D’Arcy-McGee during his address to the National Assembly. I encourage you to watch the video online.

As my mandate as your President comes to an end, I would like to thank you all for the confidence that you have shown me and for the honour of serving this Society during its 70th year.  It has been a privilege to be your President, and I could not have done it without the support of so many people, Past Presidents, Directors, and friends, who have freely shared their advice and experience with me. Thank you Allen, Larry, David, Heather, Nancy and Robin and many others, I could not have done it without your advice, hard work and support throughout this season. A special thank you to Hershie Frankel and Lara Malewski for their behind the scenes work which allows our events to run smoothly but often remains unseen to the uninitiated.

Gregory Azancot will be your new President and he will be inaugurated on June 11th. I am certain that under his leadership the Society will continue its important work and will only become stronger.

I hope you will join me on June 11th and look forward to seeing you!

May the Society continue to go from strength to strength!

Advocacy in the Senate: The Gold Standard 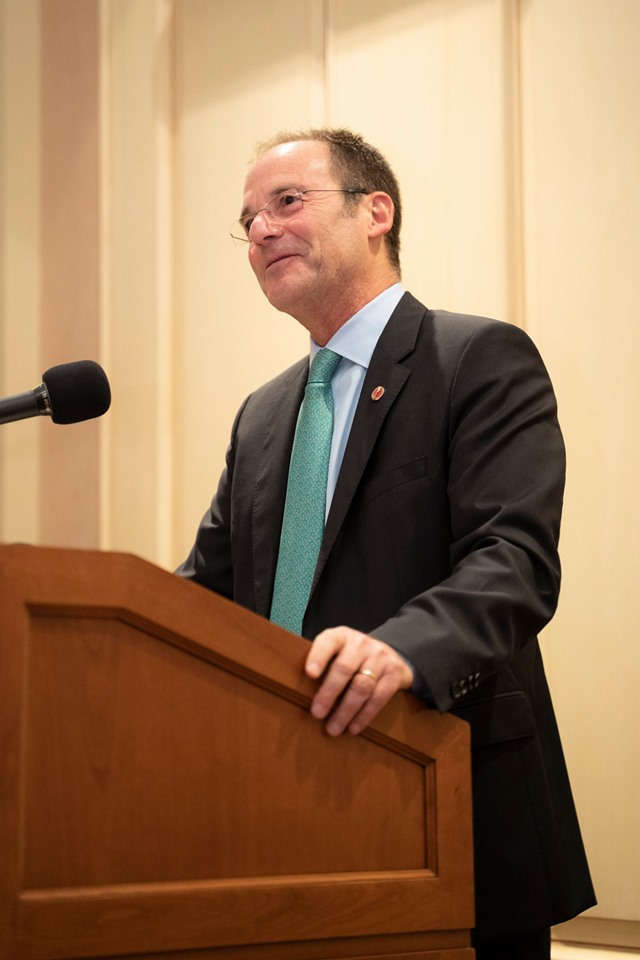 On May 2, 2019, our annual Alan B. Gold advocacy was extra meaningful, as the featured guest speaker was none other the late Chief Justice Gold’s son, Senator Marc Gold.

Drawing on lessons passed down by his late father, as well as the basic constitutional principles upon which our country was built, Senator Gold took us on a tour of the Senate, providing us with insights into behind-the-scenes machinations and political manoeuvering that takes place in, and around, the Upper Chamber–like a three-dimensional game of chess.

In particular, Senator Gold demonstrated how lessons he had learned from his late father continue to influence his advocacy efforts in the Senate on a daily basis. Those advocacy efforts are directed both towards convincing the Conservative senators who sit across the aisle or persuading Senator Gold’s fellow “Independent Senators Group” (a “motley crew” that is far from a homogeneous set of Senators formerly known as “Liberals”, as some may think).

As Mick Jagger has been known to say (or sing), “You can’t always get what you want”, but Senator Gold demonstrated (less lyrically), through the art of advocacy, our country gets what it needs.

At the base of Senator Gold’s advocacy efforts lie three basic skills passed down by Chief Justice Gold to his son: stop, look and listen:

The most important tool at a senator’s disposal is the art of advocacy. A senator must advocate in committee, in public, and with his or her colleagues. The ability to persuade is the basis for success.

The Senate is an institution in transition. It is meant to be a house of sober second thought and its rules are designed for an adversarial system with one political party on each side of the House–a binary system, if you will. However, with the advent of the “independent senators” who do not take instruction from a party leader in the House of Commons and do not vote as a block—while the Tory senators often still do—makes for new and evolving dynamics. The Senate is now a body where groups form based on the issue at hand—a Senate that is still seen as partisan by some senators, but less partisan by others. Indeed some senators lack political experience altogether, while others are former members of parliament or political party activists.

In trying to persuade his colleagues, Senator Gold again draws upon lessons learned from his late father:

Senator Gold closed his talk with some final lessons from Chief Justice Gold:

In the political arena where Senator Gold now finds himself, these lessons are the key to success.

This year’s Alan B. Gold memorial advocacy lecture had more significance than ever before, as the lessons imparted by the late Chief Justice over the course of his career in advocacy formed the very essence of our guest speaker’s presentation – and that guest speaker was Justice Gold’s very own son.