Last week was, as they say, different. It was different for me personally for reasons that had nothing to do with the Society. Last week marked 30 years since my alma mater, my city, people that I knew and some that I did not were touched by tragedy. I think it is important to highlight this day and the lives of all the victims. I was going to make this central to our annual human rights dinner, but alas it was not to be.

While we have been in the news lately, I am of the strong opinion that we have nothing with which to reproach ourselves. We are a volunteer association of human rights lawyers and we have as a mandate – and indeed a duty – to stand up for human rights and the rule of law . This is the same mandate we’ve pursued for 71 years and counting.

Regardless of whether or not you personally believe in the underlying societal change that Bill 21 proposes to bring about, you should respect the fact that in a free and democratic society, a human rights association like ours is entitled to express its views in both the court of public opinion and the court of law.

We chose to postpone our December 10, 2019 dinner conference. However, the Society, through its human rights committee, has been active in that it filed our intervention. On behalf of the Society, I want to thank Teddy Goloff for acting pro bono on our behalf.

I look forward to seeing all of you at our January 15, 2020 dinner event, featuring noted hall of fame goaltender, Minister, lawyer and award-winning author, the Honourable Ken Dryden, as well as at all of our other fantastic events for the rest of the season, which you can see here. I also want to thank Me Frederick Pinto for speaking and hosting us at our first Members-only CLE breakfast on November 20th, which you can read about further down in this newsletter.

As the festival of lights and the holiday season approach, I take this opportunity to wish all of our members, dinner sponsors, speakers and friends much health and happiness. 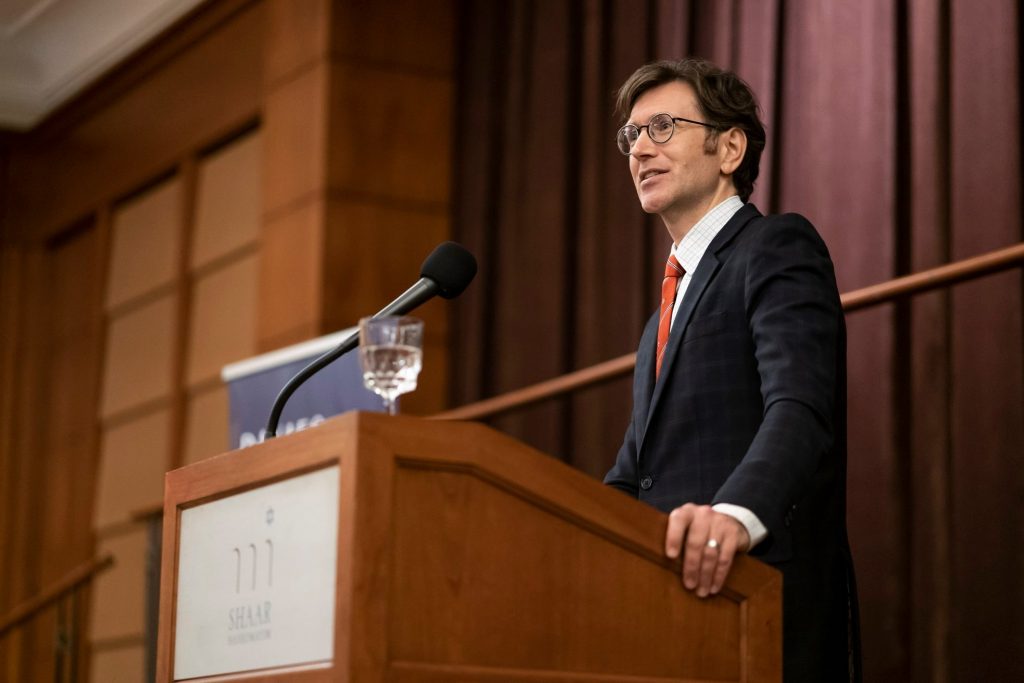 On September 24, Dean Robert Leckey of McGill University’s Faculty of Law delivered the 2019 edition of the Alan B. Gold Lecture. This annual lecture, named in honour of the late eminent Jewish jurist, and former Quebec Superior Court chief justice, Alan B. Gold, OC, OQ, is devoted to the art of advocacy.

Before a packed house, comprised of some of Quebec’s most prominent legal minds, Dean Leckey gave an eloquent and critical overview of the new ways in which governments in Canada have been evoking section 33 of the Canadian Charter of Rights of Freedoms, known as the “notwithstanding clause”.

This trend showed itself last year when Ontario premier Doug Ford threatened to use the override to pass his law cutting the size of Toronto’s city council. However, of far greater consequence—and far greater interest to the Lord Reading audience—Quebec premier François Legault’s government recently invoked the notwithstanding clause in passing Bill 21 – An Act respecting the laicity of the State.

In the past, governments would at least wait for a law to be declared unconstitutional by the courts before invoking the notwithstanding clause. Under the new paradigm, governments are attempting to shield their legislation from constitutional challenge ahead of time by including the required language in the initial version of their legislation. They do not even show any pretense of attempting to demonstrate that the harm from the legislation’s infringement of a right is proportionate to the benefits, as would normally be required under the Oakes Test pursuant to section 1 of the Charter, which allows reasonable limitations on rights and freedoms through legislation if it can be “demonstrably justified in a free and democratic society”.

The litmus test used to be the reasonableness of a limitation on rights. Now, the test is becoming the comfort level of the majority with the degree to which rights are infringed, said our guest speaker.

In the past, jurists opposed to a law would simply have to prove it infringes on the Canadian Charter of Rights of Freedoms. Under the new paradigm, jurists face a greater challenge. They will need to be “bold, ambitious, and imaginative in drawing on our constitutional resources” when defending individuals in the face of rights-infringing legislation.

The notwithstanding clause does not allow ALL Charter rights to be infringed upon; only a select list of rights.

“When the legislature of Quebec invoked section 33 to shield Bill 21, some people seemed to assume that the entire Charter was off the table.”

Thus, the notwithstanding clause must be read restrictively.

“Advocates might helpfully remind judges that the judiciary should give section 33 its due, but not an inch more. This proposition is consistent with construing exceptions narrowly. After all, section 33 is plainly an exception to the Charter’s protection of rights and freedoms.”

For example, the notwithstanding clause is not allowed to override section 28:

28. Notwithstanding anything else in this Charter, the rights and freedoms in it are guaranteed equally to male and female persons.

It will be interesting to see how the Courts respond to a challenge to Bill 21 based on infringement of women’s rights under section 28. Arguments are already being advanced to the effect that hijab-wearing women are the primary population affected by the Laicity law: Opponents of the law are arguing that women feel the effects of Bill 21 far more than do men.

Even if the notwithstanding clause is successfully invoked by the legislator, the courts will at least have occasion to explain to the citizenry in what ways their rights are being infringed. Section 33 does not prevent a court from reviewing a law; only from declaring it inoperable.

“To be clear, such a declaration would not stop the challenged law’s application, but it might still be valuable. Citizens would gain a clearer understanding of the law’s impact on rights.”

Jurisprudence tells us what a government needs to do to invoke the section 33 override. But the courts have dealt little with the effects of doing so, and of what happens next. “That is uncharted territory”, observed Dean Leckey.

For instance, hijab-wearing education students or immigrant teachers in the process of acquiring credentials to teach in Quebec who are denied employment will argue they have suffered monetary losses. What will stop them from seeking damages from the Quebec Government for the foreseeable harms of operative legislation?

And plenty more “bold, ambitious, and imaginative” arguments will surely be advanced in cases challenging laws for which the notwithstanding clause has been pre-emptively invoked. Interesting times lie ahead, with plenty of case law still to be written by the courts.

Dean Leckey’s speech to the Lord Reading Law Society has been published in the University of Alberta Faculty of Law’s Centre for Constitutional Studies journal, Constitutional Forum Journal. You can read it here.

You can watch the lecture above, or on YouTube

Is free speech online really free? Does the law protect even the worst internet trolls?

On November 20, Internet law expert Me Frederick Pinto of Pinto Legal answered these and other questions in his talk entitled “Protecting Freedom of Speech Online”.

This was the first of this season’s Members-only CLE breakfasts at Lord Reading. A good number of members showed up in the early hours of the morning to enjoy bagels, lox and cream cheese—and coffee—while learning about freedom of speech on the internet. The event was held at the Old Montreal offices of local media and entertainment success story Stingray Group, where the décor is more ‘tech start-up’ than at our usual venue.

Nowadays, anybody can be their own media company. However, to get a message out to a wide audience, one needs to use a platform provided by one of the three major social media companies—Facebook/Instagram, Google/YouTube or Twitter.

Yet each of those three behemoths self-police their channels. If a nameless and faceless employee of, say, Facebook decides your message is inappropriate, that Facebook employee has the power to shut you down. You might go from thousands of followers to zero, and if the other two major platform providers also ban you, then you will no longer have access to a wide audience (Of course, other social media sites exist, but they enjoy a much narrower reach).

“If there be time to expose through discussion the falsehood and fallacies, to avert the evil by the processes of education, the remedy to be applied is more speech, not enforced silence.”

To date, there have been two paradigms for regulating media channels:

In the modern era, though, social media platforms serve as both a conduit (like the telephone companies of yore), but also exercise editorial power—by reserving the right to ban content they find objectionable.

Our speaker suggested that a hybrid of these two regulatory models is needed to circumscribe the extraordinary editorial power wielded by the three major social media providers. Me Pinto recommends a framework that more closely resembles the ways in which freedom of speech has been regulated in society until now:

“I may not agree with you, but I will defend to the death your right to make an ass of yourself.”
― Oscar Wilde

Despite the early hour of his talk, much discussion was provoked by Me Pinto. Will there ever be changes to the framework within which social media platforms operate? Is it even possible to get state and corporate actors on the same page? Time will tell … but if they are looking for inspiration, they would do well to consult Frederick Pinto!

It’s never too late for you to renew your membership or become a member for the first time. Membership offers significant discounts for dinner-meetings and with our updated pricing for this season you’ll be saving even more! You’ll also get exclusive access to the great members-only CLE events which we have planned. We’d love to have you as a member!

You can become a member online here or alternatively, you may download the membership form here. Membership has its privileges!